The Woman Who Took Liberty

Aricia Fleurimond is famous. In the mountains of Cooperative Kounol near the village of Djot, Haiti, where she tends her crops, she is a hero — a woman who led a coup d’etat that ousted a corrupt cooperative president, a man.

Wearing a pair of men’s dusty loafers, Aricia stands four feet, five inches tall, hardly what I’d expected. Her blue skirt and red blouse have been laundered to an almost translucent thinness; her white purse is child-sized. Aricia doesn’t look like a revolutionary, but her language is passionate and beneath her calm exterior, a fire burns.

It’s unseasonably cool; Aricia and I and our translator shiver in the mountain air. Typical of Haitian hospitality, cooperative members have enthusiastically dragged rickety wooden chairs behind their silo for us. The small rectangular building constructed of cement blocks and roofed with tin provides shelter from the wind. Just beyond our feet, the narrow lip of land where we sit drops away sharply.

I begin by asking Aricia when she was born. French is the official language of Haiti’s urban educated and is not spoken or understood in rural villages; she replies in Creole. Our translator explains that it was in June 1958. At the age of six or seven, Aricia went to work in the gardens and fields with her father. Often the whole family went; Aricia, her three sisters and brother would labour until nightfall in the fields and their mother would cook meals there. 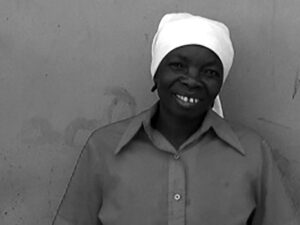 “I didn’t grow up well,” she says. “I stayed short. I didn’t eat well as a child; sometimes I ate just once a day. Sometimes I ate cornmeal twice a day.” Attending school was not an option for Aricia. “I always wanted to go to school and get an education. I looked at other girls who went away and got to leave the area, but my parents never had the means to let that happen.”

She felt tied down, restricted. And ashamed. At the age of fourteen or fifteen, she resigned herself to working in the fields. Little has changed since Aricia’s hardscrabble childhood. Women still slash weeds with machetes and gather them so the men can turn the soil. Then they plant seeds and two weeks after the crop has sprouted, they weed the fields. It takes about twenty women two days to plant a hectare. The challenges in these remote mountainous areas are formidable; electricity is not available and tractors cannot negotiate the terrain. Implements are picks and hoes. The few books that exist are written in French, not Creole. Learning occurs by oral repetition and education usually ends after grade five. Aricia works as part of a konbit, a team of workers who hire themselves out to prepare, till and plant each other’s land. She also owns farm land which is a requirement in order to be part of a cooperative.

I inquire about the size of the field Aricia works. She points. I don’t understand – we are surrounded by mountains; terraced down their steep sides are crops spreading out in every direction for miles. She points again and then makes a broad sweeping motion with her arm.

“She works all of that,” our translator replies.

And this is when I weep. The garden plot I’d imagined Aricia tilling has suddenly been replaced with countless hectares of back-breaking labour. We are overlooking an endless expanse of pigeon peas, beans and corn; a very clear picture of Aricia’s existence emerges. She gazes into the distance and waits as I try to compose myself.

The women of Haiti live daily with the reality of abuse and vulnerability yet some of the stories that emerge from this land of bewildering contradictions are ones of resilience, faith, creativity and pride. They are stories like Aricia’s that paint shining pictures of hope upon dark pages.

When Aricia heard about pcH, she was intrigued. Three years ago she invested twenty-five gourdes, about five Haitian dollars, or seventy-five cents Canadian, the amount required to become a member of her cooperative.

“I’m the kind of person who likes to ask questions,” she says coyly. “When they took my gourdes, I asked them what they were going to do with my money. I was a bother to them and after a good long time, I saw they weren’t doing anything, so I took my money out.”

At a general assembly meeting, she dared to question the president of Cooperative Victorieuse about the mismanagement of funds. It was a bold move, especially for a woman; in a lawless country like Haiti, to challenge someone in a position of authority can mean risking one’s life.

The president was the cooperative’s most educated and important individual; because of his powerful position he gave unfair advantage to his family members, buying only their seed and crops at the exclusion of other members. Those in Aricia’s cooperative did as they were told, however, Aricia is not a typical member. When the president did not provide her with satisfactory answers, she continued to challenge him over the weeks and months, refusing to back down.

“He squirmed. I wouldn’t give up. And then, no one voted him in again,” she says with a hint of triumph in her voice.

After Aricia had exposed the president’s unethical practices, she went on to become a member of the surveillance committee, an accomplishment of which she’s modest. The surveillance committee is one of the three management committees in a cooperative structure and is the most critical as it holds administration accountable to the membership. “I’m going to tell you why I joined the leadership,” she explains. “It’s because I wanted to know what was going on in our cooperative. They say things with their mouths  and I wanted to be part of the surveillance committee and see if what they were saying was true. I found there were problems and things weren’t always going the way they said; the president was taking more than his share of the credit and serving only himself. We did have elections and we saw that some members did get credit and some did get to sell their crops to the cooperative, but many didn’t.”

Before joining the cooperative, Aricia could recognize simple numbers and write her name, but now she can write a letter to her brother who lives in the village of Cabaret and she can read. As a member, Aricia participated in literacy classes, learning mathematics and how to read and write by using books created by pcH staff. These materials are written in Creole and use phrases, language, scenarios and role-playing relevant to everyday life. Through other educational courses offered in her cooperative, Aricia learned about reforestation, agricultural techniques, conflict resolution, how to compost, increase crop yields, and take inventory of a silo. She continues her studies, nurturing the expectation that her eight children will graduate from school; her eldest is about to finish high school.

Aricia acknowledges the role of women is extremely difficult yet she no longer accepts the view that all men are ‘chiefs’; with education and training, she believes the future for the women of Haiti will change.

“I’ve heard people preaching in church that men have authority over women and can beat them. But in the cooperative meetings we begin to understand that this is not so,” she says.

Aricia’s hands are folded neatly on her purse; they are rough with dirty broken nails. She sits across from me, a tiny figure on a battered wooden chair at the edge of a mountain. Tendrils corkscrew from beneath a kerchief tied over her head. My insides are still trembling; in these surreal hours among the clouds, a sister has laid bare her soul to me with generosity and honesty. Mesi anpil, Aricia. Anpil, anpil. Thank you so very, very much.

I ask her what she would like to say to the women of Haiti. She takes her time answering. If we don’t leave now, we’ll be descending treacherous roads at nightfall, but I don’t rush her. I want to hear every word of her hard-earned insight.

“I would tell women you are people like all people and I would wish them to be courageous,” she finally replies, looking out over the fields. “I would tell them you deserve the same wages as men to do the same work. I would ask them to understand they have the same rights as men. pcH is an organization that helps women to open their eyes. I would like pcH to grow and do more of its work.”

She gets up as I gather my things and prepare to go. I’m unable to articulate how moved I am by her story, how honoured I am to have witnessed her fiercely beautiful spirit, how proud I feel of her accomplishments. Despite all that separates us, we share a breathtaking victory.

“Bon couraj, Aricia,” I say. She grins impishly and then quips, “Bye-bye.” Everyone standing around us bursts into laughter.

I watch her as we leave. The sky has already begun to draw sheer smoky drapes across the mountains. Dwarfed by this vast background, Aricia stands beside the silo and waves. A cold wind snaps her skirt around thin legs and tugs at her blouse. And then I realize something grand. In 1803, while Haiti was still under French rule, the rebel slave, Jean Jacques Dessalines, took the blue, white and red flag of France, ripped out the white, and stitched together the red and blue. Aricia is wearing the colour’s of Haiti’s flag. Yo pay bay libete. Se pran pou ou pran l. Liberty is not given to you. Take, you must take it.

Your ticket for the: The Woman Who Took Liberty

The Woman Who Took Liberty