This past December I had the immense privilege of taking FIDA founders Jack and Anne Wall on a farewell visit to Haiti.

They are both in their eighties and desired, while still in reasonable health, to see “one more time” the people and the land where they spent the latter part of their working life.

They spent most of their week in and around the guest house that Anne had established as a means to support the activities of FIDA in Haiti. There was a constant stream of friends, former employees and craft vendors that came to sit and reminisce as well as sell their wares to Anne who closely inspected and applauded their handiwork. 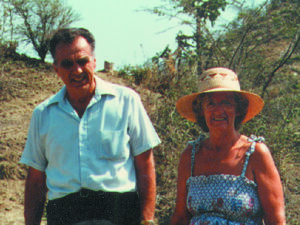 Jack was able to travel to Haut St. Marc where he was welcomed by staff and affectionately embraced by cooperative leaders. It was December 13th. On this very day, 23 years ago, the first cooperative of St. Marc was formally established; an auspicious occasion that moved Jack immeasurably and prompted him to ask cooperative president Emates why he took this leap of faith in 1984. Emates answered, “Mister Jack, when I saw you come to start cooperatives in Haiti you were no longer a young man. You were sixty years old! I said to myself that there must be something to this cooperative idea for him to have so much passion and energy. And so I joined. Today I know I will be a member of the cooperative until I die.”

We then visited the site of one of the newest cooperatives, Coopérative Jilbe. The vibrant yellow and green painted silo anchored lively community activity. Men were busy at work, capping the stream to divert water to the city below. Others were harvesting the peanut crop. Women and children gathered at the well, washing clothes and scrubbing laughing children in the gurgling spring. Flags of fresh laundry filled tiny family yards…

Such are the sights and sounds of a productive and healthy community in Haiti. They have been hard won; not just by Jack and Anne, who came to this country at an age when most are ready to retire, with nothing much more than commitment to a vision; or by the countless people who faithfully supported this mission. This beautiful little community exists today because its members chose to take a leap of faith, to address their social/cultural constraints and physical adversities and to take ownership. This is the foundation of true development: “Change must be in the hands of those that desire it,” says Jack. “If development is not owned by the people and managed by the people, it will surely fail.”

This is a mantra that was oft repeated from my childhood through to adulthood. It is rooted in a vision that I today share with my father and mother along with thousand of men and women in Haiti who have sought to better their lives and their community by coming together as a productive agricultural cooperative.

Your ticket for the: In Their Footsteps