Perspectives on Life in Haiti

After spending seven months in Haiti, we have had the opportunity to experience a wide variety of life. Some things we expected; others were more surprising… 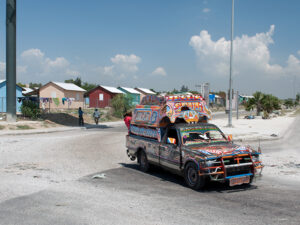 We expected to meet guests from an assortment of backgrounds and interests and have not been disappointed. The quality of people with their love for Haiti and diverse interests in assisting and coming alongside this society has brought a far richer level of conversation than we ever expected. We have not all had the same spiritual and philosophical beliefs, but we have connected as human beings and friends in the unique setting of Wall’s International Guest House in the capital city of Port-au-Prince.

The political scene carries both similarities and differences to Canada. There are various parties, candidates, speeches, blaming of one another. In Canada, that results in an election call at some point with so many weeks given in advance to prepare a campaign. Here, the campaign stretches on and on, the election day gets changed and changed again, there are assassination attempts and violence and a UN force to try to keep the peace and facilitate the process. One realizes the great benefit of simply having a process that gives its citizens the opportunity for free choice and the hope that something positive will have been accomplished by the end of the exercise. The long awaited election was finally held on February 7, but it still took over a week to declare the winner, amidst much controversy. The inauguration was delayed to to Senate elections, and people waited impatiently for their new President, Rene Preval, to officially take office on May 14.

Health issues are a concern in any country. Haitians seem to visit the doctor at a rate that at least equals that of a Canadian, but most likely far exceeds it. Even if one is experiencing the common cold here you are asked if you have been to the doctor. Medical care seems readily accessible in Port-au-Prince and not that costly for the average Haitian. When a pool accident necessitated stitches for a guest, staff walked him to the nearest medical facility, which was only a block away. There was no waiting and after having part of his head shaved and stitches and medication administered, the total bill amounted to less than $20 USD. Compare that to waits and costs in a Canadian hospital emergency ward and this system seems preferable.

Celebrating Christmas in Haiti was an event that we looked forward to as we were interested in the differences that would be visible from Canada. We were surprised to see faces of Santa Claus sold on the sidewalks along with vine creations in the shape of reindeer and even Christmas trees; they seemed out of place in this tropical setting. However, for the most part we were glad to see that Port-au-Prince wasn’t engrossed in all the commercial outward trappings of the season, but rather Christmas Eve and Christmas Day consisted of seeing many people walking to their churches for times of worship and reflection.

New Year’s Eve was the loudest night we’ve experienced in Haiti. It appears that Haitians love to celebrate with firecrackers and noise, and it was impossible to distinguish firecrackers from gunshots as they continued until the roosters began crowing. Parties with loud music are never an issue for bylaw control as the policemen like to station themselves nearby to enjoy the music along with the neighbourhood. The rights of would-be sleepers is not an issue in this city.

We overhead one guest talking to another on our rooftop, “What’s that smell?” One gets used to the smells in the city over time. It’s a mixture of rotting garbage, diesel fumes, smoke from burning garbage, which can occur any time within the city, urine from the lack of public restrooms, and animals that roam freely, including pigs, goats, dogs and chickens. That’s not to say there isn’t tremendous beauty in Haiti, it’s just that sometimes the most vivid images and sensations provide such contrast to life in Canada.

Those are just a few of the different elements one encounters in Haiti. We began by mentioning the relationships we’ve experienced at the guest house. We’ve learned that relationships and the way people treat one another are paramount to Haitians. We often want to accomplish a task. They want to connect and know they are acknowledged and valued as a person; to be treated with respect and dignity no matter what their economic or social position. With all that we see and experience in our year in Haiti, we hope this lesson is the one that will become the most ingrained in us.

by Waldo and Pam Pauls

We believe in the inherent right for every person to own self-respect and to know self-worth.

We believe that dignity is achieved through a cultivated ability to provide for ourselves, our family, and our fellow people.

We endeavour to encourage self-sufficiency in Haiti; to work at the grassroots level to introduce appropriate technology and training; to bring hope, encouragement and resources to help communities work out solutions to their adversities.

Your ticket for the: Perspectives on Life in Haiti

Perspectives on Life in Haiti