Who We Are and What We Do

FIDA has actively been promoting the productive agricultural cooperative model in Haiti since 1984.

This model is viewed as the most appropriate when addressing the economic issues of poverty, and given a context wherein the country lacks political will, national infrastructure, and general security. FIDA, along with its working arm in Haiti, productive cooperatives Haiti (pcH), has received global acclaim for an effective adherence to the participatory approach when undertaking sustainable development activities, particularly among the rural poor.

The founding principles are guided by a vision of addressing the root issues of poverty, namely to foster an environment of economic productivity appropriate to rural communities. Inherent in the mission is to promote the elements of self respect which is understood to be rooted in productivity, ownership and self reliance. The original constitution, created in 1980, cites the following ancient Chinese philosophy:

Go in search of your people
Love them
Plan with them
Begin with what they have
Build on what they know
But of the best leaders, when their task is accomplished
Their work is done
The people all remark
“We have done it ourselves” 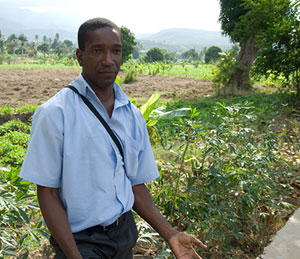 The objectives of the organization are to foster economic development and social transformation in rural communities through the productive agricultural cooperative model. The organization provides resources and introduces appropriate technology to communities who desire to advance themselves economically by participating in the cooperative model as guided by the Seven International Principles of Cooperative.

Our commitment to our mission and philosophy has provided cooperative and agricultural resources to 37 cooperatives encompassing more than 7000 members. We provide agricultural credit and training in cooperative management and sustainable agriculture/environmental practices to help increase productivity and generate economic activity. As well, we contribute to the building of grain storage units, agricultural supply stores and health clinics, all within the context of the cooperative model. In 2000, an extensive non-formal adult education program was introduced to address the endemic themes of fear and mistrust that so inhibit the cooperative movement in Haiti. The program has successfully improved the quality of life for cooperative members, not only by providing an opportunity for them to improve their literacy and numeracy proficiency, but also through the teaching value added subjects like conflict resolution, servant leadership, and gender issues.

Your ticket for the: Who We Are and What We Do

Who We Are and What We Do